The morning arrived and we were ready to leave Esperance. Our van was packed, our water tanks were full, the kids Ipads were charged and car snacks ready! Look out South Australia….here we come! Let the long drive begin……

Even though there is nothing to do along the Nullabor, it is still a milestone on every travellers list. We were ready and excited to cross it off ours!

The start of the Nullabor is not all sand and flat terrain. Most of it still has trees, lots of shrubbery and some farms but as you continue to drive, the trees become non existent and the shrubbery slowly starts to disappear. Which is when you are left with nothing but the open road.

Every traveller is different when it comes to how long it takes to cross the Nullabor. It really does come down to how many hours you would like to drive everyday. We chose to do two days of driving with limited stopping time. We didn’t know how we were going to go or how long the three kids were going to last but we were going to give it a red hot go!

1st stop- Norseman town was our first fuel stop. We didn’t stop here long. We stopped for just enough time to make some friends by meeting another travelling family. We all had a chat over a sandwich and then we all hit the road again!

2nd stop- Our next stop was Caiguna Roadhouse. This leg of the journey was 370kms, our longest stint yet. We needed fuel and were ready to stretch the legs. This is where we took the iconic ’90 mile straight’ photo! 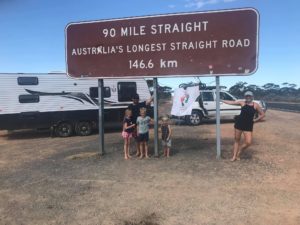 Our first day we were eager to get as many kilometres under our belt as possible, so we drove until 5.oopm. By then the kangaroos were starting to come out, which made it a good time to pull over for the night. The Nullabor is great for pull over stops. They are everywhere. So finding a place to sleep for the night was not difficult at all. We found a great stop which offered some shade and there were three other vans parked up. Even though we were on the Australia’s longest stretch of road, the kids still found some other kids to play trucks with outside before bed. Our first day ended with a roast dinner and a beautiful sunset. 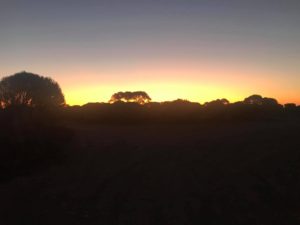 We were woken  up by kangaroos bouncing around next to our van looking for water or food. It was a priceless experience. Overnight was chilly and we had some morning dew on the windows. Although this quickly changed as soon as the sun was above us. It ended up being a very hot day.

Second day from Caiguna to Penong 755kms (crossing the border)

1st stop- Cocklebiddy. We were up bright and early and at 7.00am we took off and hit the road for another full day of driving. We planned on driving till 5.00pm again, to clock up as many k’s as possible. Along the way we stopped at nearly every roadhouse to stretch our legs. We found they were spaced roughly 180kms apart. Most of them had playgrounds where the kids could have a play and burn some energy. Today we were headed for Penong, a small stop just 1 hour away from the South Australian border.

The best part about this leg of the journey is the Great Australian Bite. The views are amazing, we parked up the van and went for the small walk to the cliff’s edge. The water was crystal blue with lots of whitewash hitting up against the cliffs. The highlight was seeing sharks circling around at the very bottom of the lookout point. Can you see our van in the picture?? 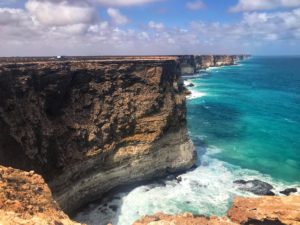 This was really simple, the inspector asked us what we had. We handed it over, he had a look in our fridge and cupboard and we were allowed to leave. Very straight forward and done within no more than 5 minutes. You can find out about the quarantine rules HERE

After the inspection we felt like we ‘officially arrived’. It was a great feeling! Read our next blog post to find out our first findings in Adelaide.